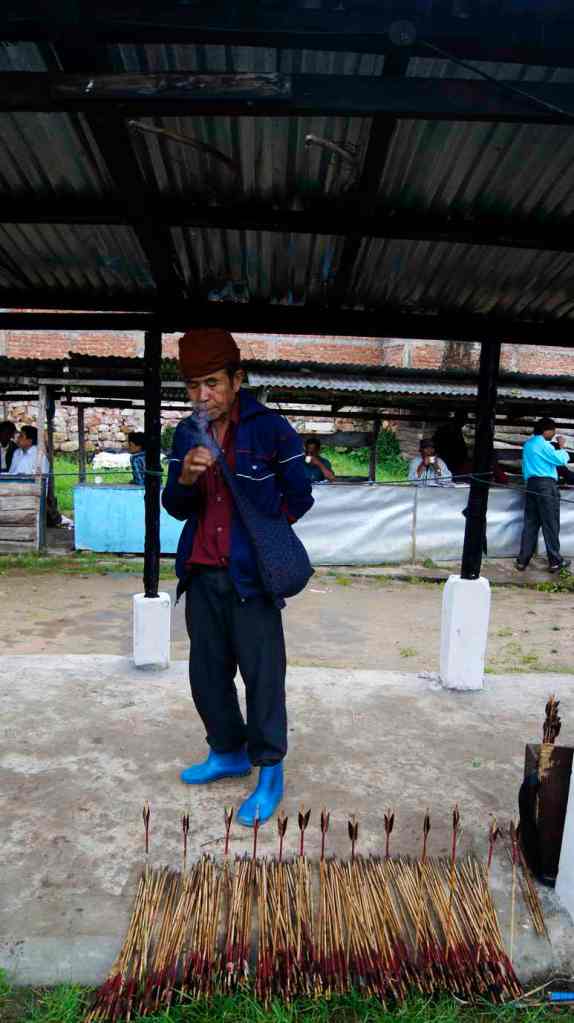 Photo of the Day

Shillong was one of the first places we went to once we reached the north east. By this time we had edited our 17 minute film and had a basic idea of what kind of things we were looking for. Since the film is being conceived as a non-verbal film, we were looking for interesting transitions. Flight of a bird, rising dust storms, modes of transport, shadow play, etc. basically anything with a strong sense of movement which we can aesthetically relate to. Along with all the music we also wanted some silent stories with a strong rhythm base.

As a quick recap for those of you who are new here. the lottery system in Shillong happens via archery. a few dozen archers sit in an arc and aim at a cylinder made of hay from a distance of 50 feet or so. All over Meghalaya there are lottery booths where people bet money on the last two digits. For eg if 439 arrows found the mark, then all those who bet 39 go home happy. This happens twice a day.

Earlier on, rice beer and yew (distilled liquor) were served at the archery. Now its only tea and some snacks. The archers are from varying age groups, 20’s to 70’s. Although they are there for the two rounds of archery, the real enthusiasm comes when they gamble amongst themselves in between the two rounds. The games vary, smaller targets, throwing arrows as darts etc.

The young guys take aim. The older ones just shoot. No matter how brilliant the younger ones are, you can’t take your eyes off the old guys. Wrinkly, leathery skin. Beedi smoke clouding their eyes, alcohol on their breath and a never ending optimism in their eyes. Some of them wear suits some are in sporting gear. The bow just sits in the palm of their hands like a feather. And the way they pick up an arrow seems like they are about to play the violin. Some of them hold on to 4 or 5 arrows like a hand fan and shoot at top speed. Some just sit and barely shoot.

There is definitely a strong sense of rhythm, which changes from person to person. And just like a good harmony, all these individual rhythms come together to make a visually rich form of silent music.

We are still seeing how we can use what we filmed at the archery. but for now we have put it together so that you can get a sense of the archery as is. For more on this please check out tomorrows Friday Release at http://www.uramili.in